JOIN PETER'S MAILING LIST
to receive his Song-Post notifications and occasional information on his Concerts and Publications.

SONG-POSTS is a current project in which Peter is posting one of his songs each week to a special website where the song can be heard and lyrics/ background info seen. The song will often relate to a feast day, a season or topical theme.

Article on Peter Kearney by Tracey Edstein This article, 'In tune with the Holy Spirit' was published in the Summer 2018 edition of Australian Catholics. Two pages. 566 KB
Good Morning Good People - Short History of a Long Project Peter's account of how his musical-narrative on the life of St. Francis of Assisi, came to be written over many years and eventually be performed at venues in Australia, Ireland and the U.K. Five pages. 94.9 KB
Full catalogue of Peter's music & a-v publications Listing CDs and DVDs that are available from Peter. Orders can be placed by phone, mail or online. 374 KB
Five DVDs - Peter's Camino walks, also in Ireland and Australia. "The photography, background music and Peter's narration really make me feel a part of the walks". (Margaret) / "Music, image, reflection, history, connection - so much pulled together for us to enjoy". (Keith) 875 KB

CHECK OUT THE PETER'S SONG-POSTS SITE:
Follow the link below. A new page will open. (Ignore the blue lettering Download Digital Track etc. There is no charge to listen).
1. Choose a song. 2. Click on the arrow symbol to play. 3. While listening, scroll a little down the screen to follow the lyrics.

ABOUT SONG-POSTS:
Peter has been posting one of his songs each week (most weeks) on the Bandcamp platform.  The series has been building gradually since July 2019. Some tracks have been published for the first time through Song-Posts - for example, Gathered for the Journey, which was written by Peter for the St. Vincent de Paul Society.

Through the Bandcamp site you can listen to a song, see its lyrics and some background information.

The main aim of Song-Posts is to give Peter's songs a hearing, unfamiliar songs perhaps as well as old favourites. The range of songs posted is broad – some liturgical, some not ... mainly for adults, some for children, some songs touching on social-justice themes or telling the stories of worthy people.

Not every 'song-post' will be a winner for you, but there will always a different song coming up, while the project lasts. All songs posted are available for use, all registered with the One License licensing scheme for parishes, schools and other institutions.

You are invited to opt-in to receive notifications of new song-posts.
Just fill in the simple form on this homepage, then click on the submit button. Peter will get back to you with a Welcome and Introduction to Song-Posts message. 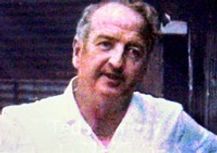 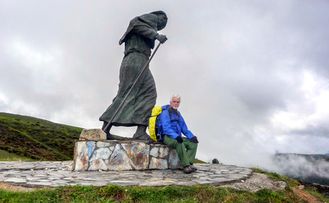 Peter walking the Camino in Spain